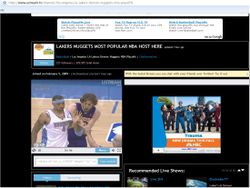 YouTube challenged the traditional content delivery market for television programming.  Whereas in the early days, YouTube was streaming a fair amount of copyrighted content, Hulu (and others) have stepped in with a legal alternative to streaming media.  While this alternative has not negated the value of MegaVideo (with their incredibly deep library and timely releases), Hulu and team have certainly made a meaningful dent.

Now consider the live-streaming market.  Sure, CNN and Hulu stream major political events live with social co-viewing options. And let's be real, social is going to drive much of the appointment based viewing moving forward.  But other than the occasional political event, there really isn't much free live-streaming in-market.

TNT and the NBA streamed a few playoff games.

ESPN is not streaming their NBA playoff games.

we are the people in your neighborhood

Who are the people in your neighborhood?

There are many players in the social scene, each with their own perspective.  You may recognize them in your office, on Twitter, at a conference or in a meeting.  Without knowing who your audience, your social circle, you cannot properly sell in social engagements, or yourself/your team.

Social Darwinists believe in the gradual evolution of the dynamic, where best practices survive, but change takes time.  This slow and steady approach generally leads to copycat innovation with a 6 month delay.  This often works, assuming the community hasn't moved onto the next big thing (Second Life anyone?).

Response to Social Darwinist: Encourage a Social Darwinist to focus on behavior rather than a technology.  They have the right thinking, they just need to be focused on the proper aspect of the communications dynamic.

Social Dictators believe that people interact because we, as the market financiers, have given them the privileged ability to do so.  If we decide to interact, they will share.  This was the mentality that led to the "viral video" craze of 2007, the widget-centric culture of MySpace, the non-participatory page on Facebook, and the irrelevant broadcast blog.  While it is true that brands can shape their social impact and interactivity, the days of brand-controlled market perception have passed (at least in the social web).

Response to Social Dictators: There is a good likelihood that Social Dictators are misinformed, or have not attended a social bootcamp or read a social case study in two years.  Fighting a Social Dictator will take time, effort and is generally unpleasant.  However, building a relationship with him/her and sharing case studies as they become available, often helps shift their point of view.

Social Deniers are probably my favorite people of all.  This group claims that social is a fad.  Their mistake is in their perception: they look at the technology platform and the pace of migration from destination to destination rather than the user behavior, which has continuously grown as the experience dynamic evolves.

Response to Social Deniers: Most Deniers have a good deal of their career invested in traditional communications channels.  Social becomes far less threatening to them when they are educated in cross-channel strategies such as "social as a performance enhancing add-on to traditional communications" or "social research as a creative inspiration" or "the possibilities of broadcast icons in social (ex Oprah, Ashten Kutcher, CNN)".

Social Heretics challenge the norm for the sake of challenging.  Zagging while the markets ziggs, is only successful so long as there is an end game, a long term vision and strategy for getting there.  I personally do not understand some of the Social Heretics, but time will tell their levels of success.

Response to Social Heretics: A real Heretic doesn't care about what you have to say.  Bring your rational thinking and sound strategies to the table, seriously consider what they have to say, and then approach with caution.  Heretics love to stir the pot, keep your head on straight and prepare for a ride.

Social Dreamers see a social dynamic and imagine endless possibilities.  While it is always great to have a Dreamer on the team, they are often best used to establish end-game visions (so long as their future visions are on point).  However, it is imperative that any strategy feature short term executables, staffing structures and realistic goals and budgets in order to one day meet the vision the Dreamer set up.  It is important to have a visionary, but your success as an agency/consultant/social marketer will come from the journey as much as it does the arrival.

Response to Dreamers: Ask them to detail the rationale for the nirvana they picture.  Ask them for a vision for the journey to their nirvana.  Keep their visionary thinking while building a solution around the vision.  Then again, if their visions are wildly off, reel them in a bit, keep the enthusiasm, but channel it appropriately with education over time.

Based on usage patterns and feedback, we've learned most people want to see when someone they follow replies to another person they follow—it's a good way to stay in the loop. However, receiving one-sided fragments via replies sent to folks you don't follow in your timeline is undesirable. Today's update removes this undesirable and confusing option.

The implications of this change to the core user dynamic within Twitter are many.  While I'm not sure that I have yet discovered all of the implications, here are a handful that come to mind.

Matt Dickman did it again.  The presentation below may be long, but it is well worth the time. This cross-discipline perspective, with an appreciation for PR, Advertising and Marketing is essential to social marketing (and all too often goes unrecognized).

As for me, I'm looking forward to the connective tissue bridging the online and the offline worlds.  Facebook does this fairly well with Connect, events, photos and videos, as do technologies like Qik. But shiny new technologies and platforms are not solutions, they are tools.  The big wins in the short term will come from deeply integrated strategies.  Events, traditional broadcast media, even direct mail should integrate with social.  Social is no longer a bucket, it's an underlying strategy.  And I for one, am excited about what tomorrow will bring.

Kudos to Valeria Maltoni for sharing on Twitter. (PS - if you aren't reading Matt and Valeria's respective blogs or engaging them on Twitter, start.  Well worth your time, trust me.)

The Future of Marketing - eMarketing Techniquest May 2009
View more presentations from Matt Dickman.

First of all, kudos to Target for launching a fantastic charity campaign on Facebook.  Great campaign, good charities and a nice gesture.

But possibly more interesting than the campaign, are the conversations taking place in the Discussions tab on their Facebook Brand Page.

They are hilarious, obscene, unmoderated and quite possibly unread by Target.  Discussion topics run the gamut, from employee discussions and Target shopper experiences to rants around some of the oddities of shopping at Target - like the conduct of the obligatory rent-a-cops by the doors.

Is this extreme transparency good for Target?

As one employee wrote, "Weed... I've seen one dumb kid put weed in his locker and the smoke it and get caught on break."  As a Target shopper, I kind of expected this.  But "pair of shoes in frozen foods" is not something I want to read.

"i LOVEEEEE it when old ladies come through the lane with condoms and make the attempt to hide them under clothes. FUNNIESSSSSSSS" is not the kind of sentiment that fits the Target brand image.

And let's not forget, "LMFAO watch your wording!! but HBA is pretty shitty, but were always short of people so I sometimes end up getting two zones which sucks. Try balancing electronics and toys.  also domestics sucks ass."

Sure, there are lots of great conversations, thousands of engaged customers and staff members.  But what will Target do when they encounter their first Dominos moment?  When an employee or staff member crosses the line (if they haven't crossed it already)?  Are they listening?  Will they know about their problem before it's too late?

Giving all of your employees a free microphone on your brand destination a risky proposition.
Doing so without monitoring and engaging is absurd. 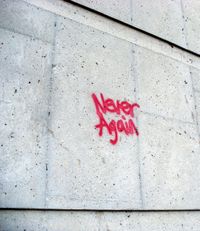 Is a picture of a breastfeeding woman pornographic?

Are pictures of Holocaust victims pornographic?

Should antisemitic groups be considered hate based, or are these forums for honest and open discussion?

Should Facebook be in the social governance game at all?

Facebook is walking a very dangerous line, both morally and legally.  By choosing a voice of "tolerance" towards intolerance, have they chosen to stand by the irrational, hateful and often racist minority?

I have spoken with eyewitnesses who saw the death of tens of thousands of innocents, including friends and relatives.  My wife's grandfather never wears short sleeves because he doesn't want to see the numbers on this arm.  I have walked through the gas chambers and seen the crematoria first hand.  I personally attend the US trial of a convicted Nazi living here in NY.  I saw the uniforms, heard the expert opinion and read the press coverage of the resulting guilty verdict.

I worked side by side with the US Office of Special Investigations to bring political pressure and popular awareness to their efforts at bringing WWII criminals guilty of crimes against humanity to justice (this was about 10 years ago).  The US government, many European governments, the Catholic chruch, multiple international bodies of justice and law as well as dozens of war tribunals have confirmed the facts.

Conspiracy theory is not always harmless honest discussion.  You have the freedom to speak, but as with all freedoms, they are a right and a responsability, not a license to act hatefully.

Facebook is stuck between a rock and a hard place.  When they chose to police their content, to define "offensive" they walked into a minefield.  While this issue hits very close to my heart, this will be the first of many such issues to arise over the next few years.

Facebook's action and inaction is actively defining not only their perspective on these issues, but their standards of practice moving forward.  Facebook, the ball is in your court.  We have seen what happens when good people stand silently by.  We are not prepared to let that happen.

Nevertheless, seeing that these groups still exist serves as a powerful dose of reality for a good liberal NYer (I'm speaking of myself).

Will this set a precedent for what is likely to come from Facebook?  How will they govern?

Should they be positioning themselves as governance officers?

Update: Facebook has now removed two groups, but three more remain. Facebook looks to be walked a tight rope, and whatever side they fall on, people will be unhappy.  You can't make everyone happy, but social governance is a dangerous game to begin with.  Personally, still not thrilled.  Facebook needs to make a public statement, clarifying their stance and actions to date, getting past this episode and moving forward.  Even if some people aren't happy, their anger will flair out.   Maintaining ambiguity is keeping this story in the spotlight.  Sources: CNET, TechCrunch, The Register, WebProNews, Inside Facebook, PC Mag and Switched.